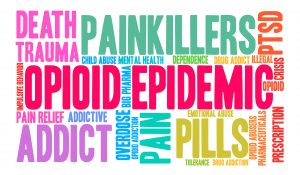 People who suffer from mental disorders are also very closely connected with opioid use.  “The opioid use population is over half Americans who have mental disorders” (Davis 2017). The scholarly article states that people with mental disorders are more likely to be given opioids and that they should not be prescribed as many opioids as they usually are. This then causes the national average of dependency on opioids to rise. Therefore, doctors want to find a way that they can lower this dependency on prescriptions so that the national average can decrease.

The study was conducted by Matthew Davis, Lewie Lin, Haiyin Liu, and Brian Sites who were published by the Journal of the American Board of Family Medication which makes this a pretty nonbiased case study. This study’s goal was to see if the number of prescription drugs that they are giving to people with mental disorders is the right dosage. Or if they are prescribed too much which allows them to then become more addicted. The methods they used to conduct this study were to get information about their participants from MEPS which is a survey of the US population that is organized by the Agency for Healthcare Research and Quality. They get information about health care utilization. The participants would also be surveyed every six months to make sure that everything was up to date. The survey was comprised of household component files that contained full-year consolidated, medical conditions, and prescription medication files. The sample size they had was 51,891 adults eighteen or older who were never institutionalized with a mental disability, which was a large representative group. This gave the study a good representation so then the results were not skewed. It is an important topic to study for the general public because it shows that people who are struggling with mental disorders are being overprescribed opioids. That is unfortunate since they can so easily get their hands on drugs that are highly addictive. The study allowed them to understand that they do need to be prescribed as much as they are. Since these people are being overprescribed it then opens up more room for people to become addicted and more reliant on the drug.

Limitations with the study were that they only focused on clinical treatment which did not include people who used illicit medication that causes a gap in the people represented. They only used noninstitutionalized US adults so there was no information about children or institutionalized citizens with mental disorders. These limitations could have significantly changed what and how much of opioids were being used and given out. Overall the study was quite good with the group they had as representation to come to a good conclusion of their study.

Not only did this study show how people with mental disorders make up over half of the people who are prescribed opioids but other studies have also proven that people who are prescribed opioids are more likely to become addicted and start to abuse them earlier than when people are exposed to the non-prescribed. Also, it allows younger people to begin taking opioids which then exposes them at a younger age and allows them to become addicted easier because they start by just taking them for their mental pain but as they start to build a tolerance at such a young age they are more likely to abuse them. This can easily happen with people who are prescribed opioids for their mental disorders. This also represents how the doctors are part of the problem since they give out a very addictive drug but have nothing to combat the “opioid products, they alleged, were defectively designed because companies failed to included safety mechanisms” (Haffajee, 2017, para 3). The companies which created these drugs that they prescribe people with mental disorders without telling them completely what these drugs do and the addiction risk. The companies also would not give the doctors enough information on what these drugs completely do so it causes them to then miss prescribed since they do not know what is the correct dosage for their patients and then wrongly dosage them.

The fact that people with mental disorders are being prescribed opioids that are very addictive to help combat their disorder is not good because it allows for people to become very addicted to these opioids and it makes it easy for them to gain access to them since if they need to be prescribed more they can easily get their dosage up. This allows for them to become addicted and it causes the national average to rise of opioid use in America. The best way to combat this epidemic is to find another type of medication for people who are battling mental disorders or for them to try and start becoming less dependent on the highly addictive opioid and take another drug to help.

Davis MA, Lin LA, Liu H, Sites BD. Prescription opioid use among adults with mental health disorders in the United States. Journal of the American Board of Family