Hi! I’m Caroline, a first-year Biology major at UNC-Chapel Hill. For my Ethnographic Study, I chose to examine a popular science museum in my hometown: The Greensboro Science Museum. I grew up attending this museum frequently and have not visited in years. Due to the pandemic, the museum was forced to close in March until its phased-reopening on June 15th. During this time, many changes were made to the museum to increase safety for guests while maintaining as much of the intended learning experience as possible. For my research, I specifically examined the changes of the museum influenced by the pandemic in relation to types of guests, safety precautions, and offered experiences.

Founded in 1995, the museum has always played a major role in encouraging students to engage with science. This museum is a staple field trip for all of the local schools and most students are well acquainted with the educational use of the museum. In 1998, the museum had already begun its path towards being the educational powerhouse it is today.  “The museum has become the neighborhood’s third important factor in science education, along with schools and homes, creating a positive triangle in child development.” (Yamanda, 1998 para.5). This statement still rings true today, almost 25 years later.  The most important reason why the Greensboro Science Center is so influential is its great emphasis on hands-on learning. This type of education is important because “Museum exhibits offer open-ended learning environments, where exhibit interactions are established by the visitor, rather than dictated by a human mediator like a teacher or a guide.” (Shaby, 2016 p.2) 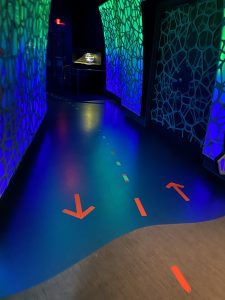 My first observation took place on Tuesday, 9/29 from 9:30 am to 11 am. After I checked in, I noticed that a path through the entire museum had been taped out as pictured above. Previously, guests were able to freely wander around the museum, choosing which exhibits they wanted to see and at what order. As I followed the path through the exhibits in the aquarium, I noticed that there were only a couple of other families in there and that the museum was significantly less busy than I was used to. Normally the museum is bustling, but that day it was silent, save for the toddlers asking their parents questions. The most significant part of my visit was when I heard children asking their parents what an exhibit was and the parents could only respond with “I don’t know.” Usually, there are touch screens with a plethora of information about every plant and animal in an exhibit along with interactive activities and videos, but those were unavailable to the guests due to the elimination of “High Touch Areas.” Other valuable parts of the museum were also closed due to this reason such as SciPlay Bay (pictured below), the Omnisphere, The Human Body exhibit, and every live show and presentation typically offered. All of these areas are exclusively intended for an interactive experience that encourages learning and a passion for science, without these, the museum has almost exclusively turned into a zoo. Both the Aquarium and outdoor zoo areas are entertaining and educational, complete with rare animals and fascinating habitats. I could spend hours walking around and admiring them, however, the entire purpose of visiting the museum is altered when these areas are the only ones offered. 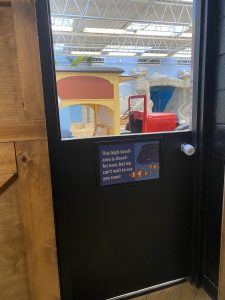 During my second observation on Saturday, 10/3 from 2:00-3:00 pm, I took the same route as previously and only encountered a few differences. Firstly, the museum was much busier on a Saturday afternoon than a Tuesday morning, as kids and parents were not attending school or work. The museum was more active and all of the animals were more active as well. I also took note of the many signs and advertisements promoting COVID-19 guidelines (as pictured below ). Hand washing and sanitizing stations were placed around the entire museum and guests were highly encouraged to use them. This, however, is not unusual, as part of the traditional experience was touching and playing with animals or interactive activities that could be major germ spreaders. 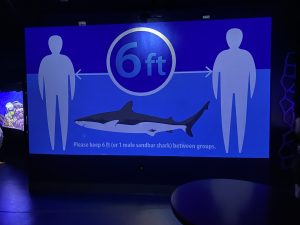 The people visiting the museum during my first observation were almost exclusively white mothers with younger children under the age of 5. There was the occasional father and child or grandparent and young grandchild, but all were white and presumably upper/middle class. During my second observation, there was substantially more diversity in both race and types of groups attending the museum. I observed a higher percentage of Black families experiencing the museum. I also took note that most groups were full families complete with both parents and presumably all of their children, but some groups seemed to be only middle or high school-aged friend groups or couples on a date. These alternative groups show that the museum is useful to multiple demographics and their respective uses for the space.

Following my observations, I determined that the museum had undergone a subtle, yet significant change. The demographics of the museum had not changed since I was little, but the experience was far different. Hands-on learning has been largely sacrificed for the safety of the guests and employees. Additionally, even the creative thought process of deciding which exhibits to attend is eliminated, resulting in a monotonous flow of people examining animals in tanks and cages. My initial assumptions were similar to this, however, I had hoped that the museum would have found a way to still provide some presentations or interactive activities. My research question failed to address how these changes could potentially affect the guests in the long term. If I were to do this study again, I would interview an employee who had worked there both before and after the COVID shutdown about how the museum has changed and their personal opinions on the specific changes and outcomes.

NATURE MUSEUM IS A SECRET TREASURE OF THE NATURAL SCIENCE CENTER OF GREENSBORO.. News & Record. Retrieved 22 September 2020, from –